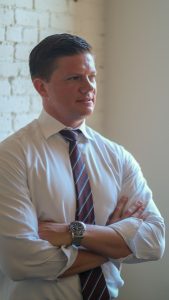 Ben Urbelis is a highly- skilled criminal-defense attorney with more than ten years of experience representing clients in state and federal courts of Massachusetts. Before becoming a criminal-defense attorney, Urbelis balanced studying for the bar exam, working as a student-prosecutor with the Norfolk County District Attorney’s Office, and bartending weekends to pay for law school. While working as a student-prosecutor, Ben Urbelis won 80% of his jury trials.

After passing the bar and finishing his time with the Norfolk County District Attorney’s Office, Ben was hired by a small defense firm that specialized in operating under the influence cases. He achieved great success by winning every case he took to trial during that time, leading him to launch his own private practice shortly thereafter. He has since established himself as a top criminal defense attorney in Massachusetts, representing clients from minor misdemeanors to major felonies including homicide.

Urbelis has received many accolades during his first ten years of criminal-defense. These awards include “Top One Percent” from the National Association of Distinguished Counsel, “Top 100 Trial Lawyer” by the National Trial Lawyers, “Top 100” by the American Academy of Trial Attorneys, and a “Rising Star” by Super Lawyers’ Magazine. Along with these prestigious awards, Ben Urbelis has won a “not guilty” verdict in 90% of the cases he has taken to trial.

In addition to his legal career, Ben Urbelis strives to give back to his community. Ben focuses on investing in future lawyers by working with his former high school as an attorney-coach for their mock trial team. He also speaks frequently at other schools, has been a part of various legal education seminars, and has worked on multiple criminal law legal publications.